.MS polymer sealant | The names, its inventor and history 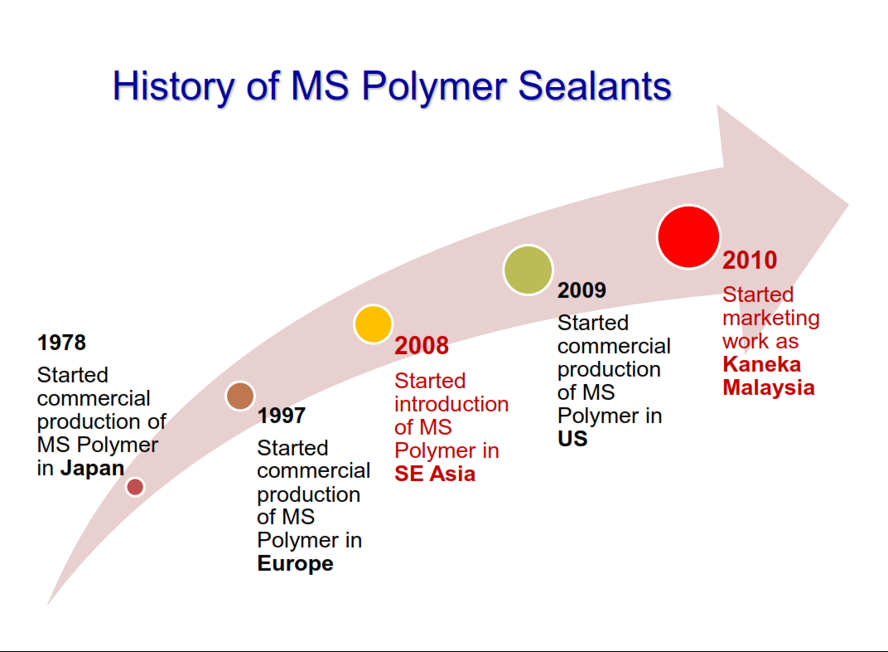 MS polymer sealant  has various names such MS (Modified Silicone/Silane) Polymer sealants – a.k.a. Hybrid, STPE (Silyl Terminated Polyether), or SMP (Silyl Modified Polymer) sealants – MS polymers are products of Kaneka Corporation Japan – most used type of construction sealant in Japan since over 30 years ago, combining the strengths of PU and silicone sealants without their inherent weaknesses.

MS polymer sealants, also known as “Modified Silicone” or “Hybrid” sealants, use a modified silane polymer as their base instead of the synthetic polymer base of silicone or the urethane-based polymer system utilized by polyurethane sealants. For example, MS polymers possess the durability and paintability of polyurethane without the shrinkage commonly associated with polyurethane chemistries. It also has silicone’s weather and UV resistance while still standing up to abrasion.

The innovative hybrid chemistry of MS polymer sealants offers many unique benefits. The silane-terminated foundation makes MS polymer sealants free of isocyanates. Isocyanates are highly reactive chemicals, which upon reaction with moisture in the air or from the substrate, releases Carbon Dioxide (CO2). These CO22 molecules form bubbles or voids within the sealant, creating an uneven appearance. Over time, these bubbles and voids can compromise the strength of the sealant, resulting in a cohesive failure.

MS polymer sealants contain no solvents, unlike many polyurethanes. Since the main chain does not have highly cohesive segments, solvents aren’t required. The result is a low viscosity, low odor sealant that offers excellent gunnability even at low temperatures.

When sealants containing solvents cure, the solvents will evaporate, and shrinkage occurs. This shrinkage detracts from the seam’s neat and clean appearance and can reduce the seal’s performance. As the product shrinks, it can contribute to cracking and even loss of adhesion. Since MS polymer sealants contain no solvents, they will experience limited to no shrinkage.

Beyond impacting performance, isocyanates and solvents also pose serious health concerns. Isocyanates can irritate the eyes, nose, throat, gastrointestinal system, and skin. They can also cause pneumonitis, which is inflammation of lung tissue.

Many solvents used in caulks and sealants are Volatile Organic Compounds (VOCs) which can adversely affect the health of building occupants. Sealants with high VOC levels may not comply with green-building initiatives like Green Guard or LEED. MS polymer sealants’ lack of isocyanates and solvents makes them excellent for use in green building projects, hospitals, schools, or any application where limiting VOC exposure is essential. 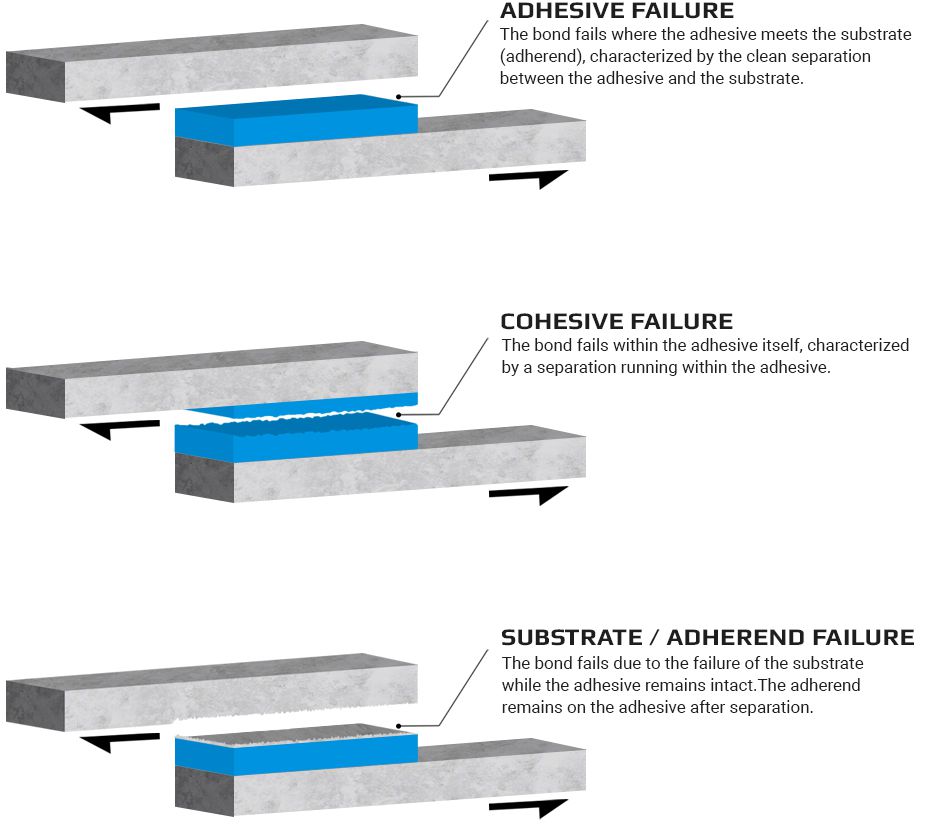 Light, particularly ultraviolet (UV) light, is an important component of weathering and degradation. When exposed to UV light, sealants undergo chemical reactions which change the sealant’s chemical composition. This process, called photodegradation, causes discoloration, cracking, and reduced performance capabilities. The presence of isocyanates, like those found in polyurethane sealants, can add to the impact of the photodegradation process.

MS polymer sealants are formulated with light stabilizers and antioxidants to limit the impact of ultraviolet light. Since MS polymers are isocyanate-free, the effect of these light stabilizers increases, improving the sealant’s UV resistance. As a result, MS polymer sealants are UV stable. They resist discoloration, cracking, and loss of physical properties like elasticity, making them ideal for exterior applications. 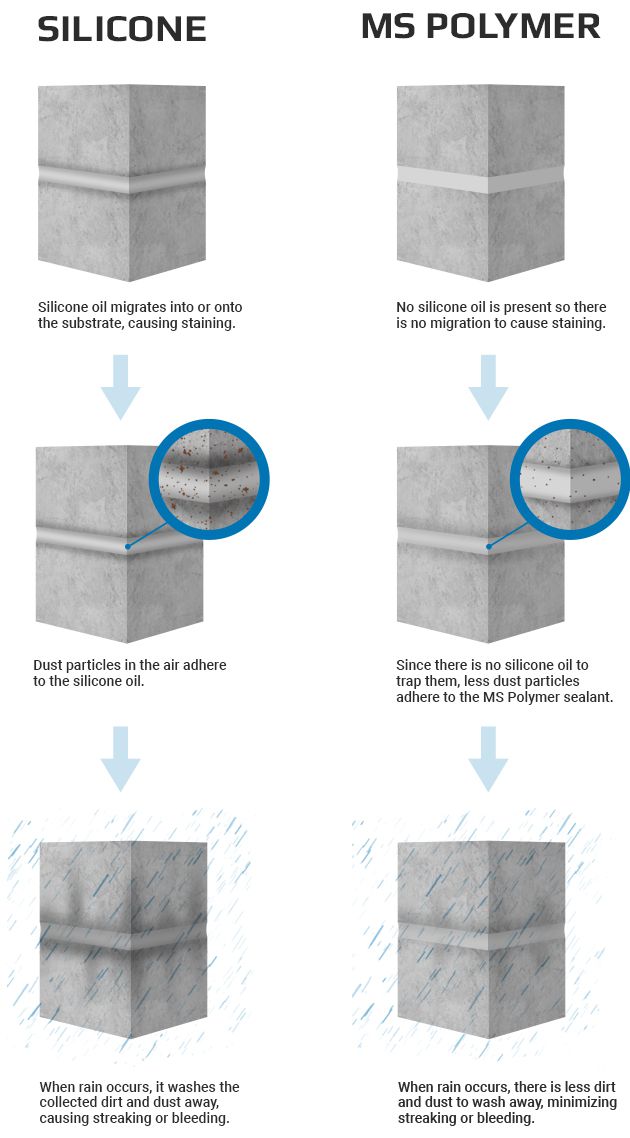 Many silicone sealants contain silicone oil. Over time, this silicone oil can bleed into and onto surfaces adjacent to the sealant, staining them. As this oil moves onto other surfaces, dirt and dust particles adhere to it. Once rain or other precipitation occurs, it washes these dust particles away, which leaves behind unsightly streaking.

MS polymers are also very flexible, enabling them to expand and contract with changes in temperature and humidity and absorb the vibrations from structural movement, impact, and sound. Combined with their UV stability and abrasion resistance similar to polyurethanes, MS polymer sealants offer a high degree of durability and weather resistance.

Like silicone, MS polymer sealants are chemically inert (non-reactive), which gives them a high degree of chemical resistance. This non-reactivity makes them well-suited for applications that may encounter harsh chemicals.

MS polymer formulations are easily modified by blending different polymer types, adding plasticizers, fillers, or other additives. These modifications allow MS polymers to be ‘engineered’ to meet the demands of specific applications, further adding to the chemistry’s versatility.

This ease of modification, adherence to most common building materials, and their high-performance capabilities make MS polymer sealants suited to tackle a wide array of applications encountered by many different industries

MS polymer sealant AS4001 is made in Malaysia in cooperation with Kaneka Japan, under brand Alseal – the largest MS Polymer sealant/adhesive manufacturer in South East Asia. The product has are exported to >70 countries and distributed in Vietnam by VTS since 2018.

Projects where MS sealant AS4001 are used